Thx salea team for this major function of trimming my captures =).

As a tired long working engineer in the end of the week I would like to have a simple dialog which data remains and which data is discarded after the trimming operation.
Nothing against the explanatory text, but when I'm sticking around the whole day with 1 and 0 and Logical HIGH and negation, I want to have a stupid simple interface which can prevent me from deleting my captures. As described in the pic.

Also I would like to annotate that this operation does not look like it's reverse able. Maybe this could be an improvement too =).

But thx for this trimming option! 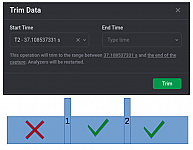