We've tested our Logic 2 app on Windows 11 without any noticeable issues.

Regardless, users have reported issues with the app on Win11. We would like to compile all issue reports here. Please comment below with details of your issue if you experience any on Win11.

I have that problem too, but also, I was successfully installed last version and reveal when update this live version of logic 2.
such a reason I temporary use logic 1 preinstalled version. 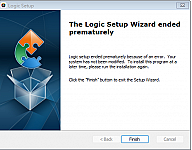 Hi. I'm having trouble installing Logic 2.3.39. I've generated installog.txt if you care to see it. The error mentions ending prematurely, but doesn't really explain why."

"I was able to fix the issue by disabling driver signature checking. Not sure if this is an artifact of Win 11 preview build. *shrug* Feel free to close this ticket anytime."

discuss.saleae.com/t/logic-2-3-37-failed-to-install-on-windows-11/1191/8
"The same problems on windows 11 insider preview (latest update) - tried several versions, incl. the last one is 2.3.38. It is not installed (rollback is in progress, it was possible to disable rollback with the keys in the registry, because periodically it is necessary to analyze other people’s results), and the device driver does not work normally (refusal to install the driver, some errors on device manager page). On release windows 11 it works fine (on another computer).
.....
I will roll back to windows 10. Insider has problems with Saleae (necessary for work), and in the release there are still problems with L3 cache (insider don’t have, but have problem with twitch too). I do not know yet. I’m waiting for the release patches, if the work with L3 is fixed in the near future, then I’ll go to the release."

My machine took the auto update from windows recently, and when I fired up the Logic it also took an update to install 2.3.37 and it failed to install the software. Tried to install several earlier version down to 2.3.30 and the problem still persisted and couldn’t use the device anymore. Does anyone here having the same problem? Any inputs will be greatly appreciated.
.....
The OS I’m using is Windows 11 pro Insider Preview. Build 22463.rs_prerelease.210917-1503.
The error message were never displayed clearly, just the status bar rolling almost to the right then back to the left and this window."